Derek Saretzky sentenced to 75 years without parole for murders of toddler, her father and senior

WARNING: Story contains graphic details that may be disturbing to some readers

There were no outbursts, just quiet crying from the families of a triple murderer and his victims as Derek Saretzky was sentenced to life in prison without the possibility of parole for 75 years for his “abominable” actions in killing a southern Alberta toddler, her father and an elderly woman.

“It’s the best we could hope for,” said Bill Blanchette outside the courtroom.

Blanchette discovered his son’s bloodied body in September 2015, which triggered an Amber Alert for Terry Blanchette’s missing two-year-old, Hailey Dunbar Blanchette. It was called off the next day when Saretzky confessed to killing both the father and toddler and took police to the rural area where he says he strangled the child.

In the courtroom on Wednesday, Saretzky’s parents and brother embraced and sobbed after the sentence was handed down. Several of Saretzky’s family members, including his father, were witnesses for the prosecution, giving evidence that helped convict the triple murderer. They were praised by the judge for the virtue they displayed throughout the trial.

Saretzky’s sentence, handed down by Court of Queen’s Bench Justice William Tilleman in Lethbridge, Alta., on Wednesday is one of the stiffest sentences in Canada since the death penalty was abolished.

With credit for time served in pre-trial custody, the sentence means the 24-year-old will have to wait 73 years until he is eligible for parole.

In June, a jury found Saretzky guilty of three counts of first-degree murder for the 2015 slayings of Blanchette, 27, his daughter, Hailey Dunbar-Blanchette, and Hanne Meketech, 69, in the Crowsnest Pass region of southern Alberta.

Jurors also found him guilty of committing an indignity to the toddler’s body, which was dismembered and burned.

Saretzky received a five-year, concurrent sentence for that crime.

Jurors show up for conclusion of case

Several of the jurors were in the courtroom for the sentencing and handed around a box of tissues in the hallway afterwards.

In announcing the sentence, Tilleman said Saretzky’s actions were “simply abominable” and had caused “grave injury to his entire community.”

The family members of the victims have lived through “a real horror story,” the judge said.

Saretzky stood as Tilleman sentenced him, showing no visible emotion.

‘This chapter is now closed’

Crown prosecutor Photini Papadatou thanked the jury for “their equanimity, their professionalism and their dedication” while sitting through weeks of often gruesome evidence presented during the trial.

Papadatou echoed Tilleman’s hope that the sentence would help the community of Crowsnest Pass move forward.

“This chapter is now closed and it’s time for the community to heal and to put themselves back together again,” she said. 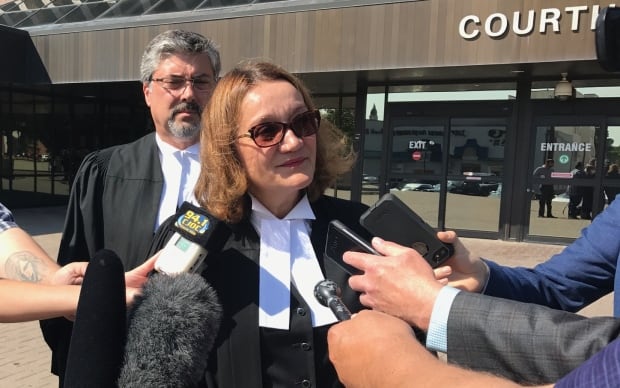 Defence lawyer Patrick Edgerton had asked for a 25-year sentence for his client but said he wasn’t surprised by the judge’s decision to hand down a 75-year sentence, “given the current state of the law.”

“It is, of course, not what Mr. Saretzky was hoping for but it’s not a great surprise,” he said.

“He didn’t have a great deal to say about it. He has some reflection to deal with over the next few days.”

Since the Conservative government brought in the legislation, three triple murderers have been sentenced to life in prison with no parole for at least 75 years, including:

Edgerton had asked the judge to consider a 25-year parole ineligibility, arguing 75 years would be a “crushing” and “unduly long and harsh” sentence and wouldn’t motivate his client to be a model inmate.

“Giving an inmate the possibility of living to their parole eligibility date is important,” wrote Edgerton in his argument. “It will also promote the safety of other inmates and prison personnel.”

Edgerton said it would be up to his client whether to appeal the conviction and sentence.

The jury deliberated for three hours after hearing nearly three weeks of testimony in June. Some of the key evidence was in videos where Saretzky not only confessed to all three killings, he also re-enacted the toddler’s murder.

Meketech was a former neighbour of Saretzky’s. On Sept. 9, 2015, Saretzky said, he broke into her home after dark, and attacked her with a baseball bat and knife. The senior’s body was found on her bedroom floor.

Five days later, Saretzky told police, he broke into Blanchette’s home, killed him with a crowbar and a knife, and took the sleeping child from her crib. He then drove her to a rural property owned by some of his family members.

Saretzky said he strangled the girl before he performed acts of cannibalism and burned her remains. For that, he was also convicted on a charge of indignity to a body. 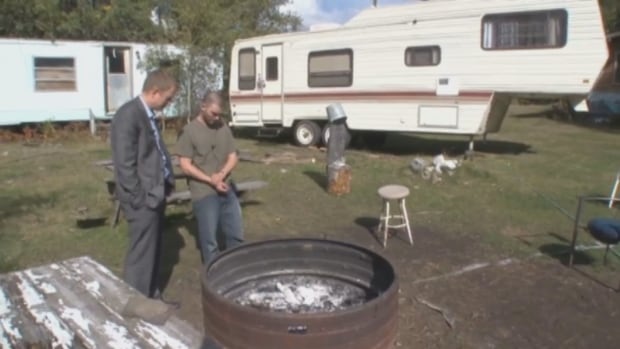 Derek Saretzky at the location where he says he killed and dismembered Hailey Dunbar-Blanchette in this image from police video. (Court exhibit )

In the firepit ashes, police recovered hundreds of bone and tooth fragments belonging to a child. Hailey’s blood was also found on a toy and in a metal pot nearby and on a pair of boots seized from Saretzky’s apartment.

As for a motive, Saretzky told police he had feelings for Cheyenne Dunbar, Hailey’s mother and Blanchette’s ex-girlfriend. He said that the night he broke into Blanchette’s home, he didn’t know Dunbar was no longer living there with her daughter.

Family members of the father and daughter described Saretzky in their victim impact statements as a “beast” whose actions will haunt them for the rest of their lives.

When police asked Saretzky if he had killed Meketech as practice ahead of the slayings of the father and daughter, he confirmed he had. He also said he didn’t think anyone would miss Meketech.

Throughout the trial, several of her friends showed up at the Lethbridge courthouse.