The evening of an alleged sexual assault at the centre of a trial involving two former members of the University of Ottawa Gee-Gees began with a victory party for the team and a connection through the Tinder dating app, according to the Crown’s first witness in the Thunder Bay trial.

Crown lawyer Marc Huneault questioned the witness, a former Gee-Gees hockey player and hotel roommate of Guillaume Donovan, one of the accused.

Donovan, now 27, and David Foucher, now 28, are being tried together. Each face an individual charge of sexual assault regarding an incident in a Thunder Bay hotel four years ago.

The victim’s identity is protected under a publication ban. 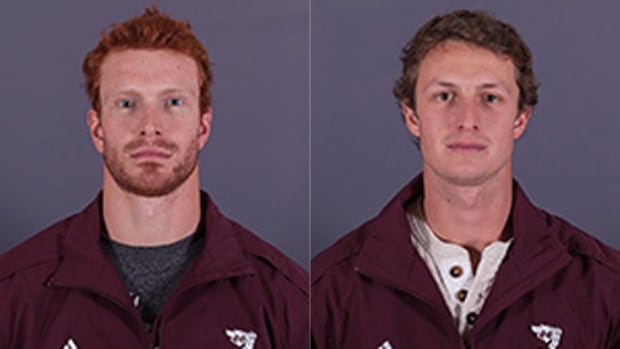 David Foucher, left, and Guillaume Donovan, right, were 24 and 25 years old, respectively, at the time of the alleged incident. (Geegees.ca men’s hockey roster)

The witness said after a night of drinking and partying he had consensual sex with the alleged victim, before the alleged sexual assaults.

On the night in question the Gee-Gees were celebrating an overtime win against Lakehead University’s Thunderwolves, he said.

He told court he messaged the alleged victim over Tinder and they met, danced and had some drinks at the local bar where the Gee-Gees players went after the game.

Several players, including both accused and he and the alleged victim were drunk, according to the witness. He had at least 10 rye-based drinks between the “pre-drink” and when he and the woman left the bar, he told court.

He says they had drinks and danced together. Witness says he doesn’t recall talking to Donovan or Foucher at the bar.

Witness says he had likely had 10-12 drinks (rye) that night before heading to the hotel. Says Foucher was between “not drunk”
and “hammered,” Donovan about the same.

He and the woman made it back to the hotel where the team was staying and they found another Gee-Gees player passed out in the hotel stairwell.

They tried to help him before making it back to the room the witness shared with Donovan and didn’t see anyone there, he said.

The witness said he and the woman had sex, but he said he stopped when he noticed Donovan was next to him in the space between their beds. ​He said he couldn’t recall if Donovan was clothed or not.

The witness said he got off the bed and went to put on his boxers in the washroom and turned to see the woman performing oral sex on Donovan. No words were exchanged between anyone in the room, according to the witness.

The man said he left the room and, after a period of time, saw Donovan and Foucher leaving the room where he’d left the woman.

He said he asked where she was and someone told her she had left. He reached out to her by a Tinder message and they met in the hotel stairwell after an exchange of messages. She was visibly “distraught,” he told the court.

The witness also told court the Gee-Gees head coach called a team meeting to talk about the heavy drinking that had sent one player to hospital and “concerns” involving a young woman between 4 and 6 a.m.

During the proceeding, Foucher and Donovan sat in the front row of the gallery.

Foucher wore a shirt and tie but no blazer and fixed his eyes on the lawyers and witness with no visible emotion. Foucher is represented by Montreal-based lawyer Celine Saint-Francois.

Donovan, wearing a dark suit and tie, was jotting down notes directly behind his defence lawyer, Christian Deslauriers.

They both formally repeated their pleas of “not guilty” in French at the beginning of the proceeding.

Ontario Superior Court Justice Chantal Brochu is presiding over the judge-only trial, which is taking place primarily in French, with some witnesses testifying in English.