‘She cried a little bit’: Derek Saretzky details kidnapping and killing of child in interogation video

WARNING: Story contains graphic details that may be disturbing to some readers

Derek Saretzky is being tried on three counts of first-degree murder and one count of committing an indignity to a body in the Court of Queen’s Bench of Alberta. (Facebook)

In her final moments before she was strangled and dismembered at a rural campsite, two-year-old Hailey Dunbar Blanchette “cried a little bit,” said Derek Saretzky who admitted to performing acts of cannibalism after he killed the child he’d stolen from her crib at night.

During a two-hour interrogation on Sept. 15, 2015, led by RCMP interview specialist Staff Sgt. Mike McCauley, Saretzky confessed to killing Hailey and her father, Terry Blanchette, the day before.

Jurors watched the video as part of the evidence presented by prosecutor Photini Papadatou at Saretzky’s triple-murder trial in Lethbridge, Alta.

Months after he was charged with murder in the deaths of the father and daughter, a third first-degree murder charge was laid after Saretzky admitted — in another interrogation with McCauley — to killing Hanne Meketech, whose body had been found in her bedroom days before Blanchette’s body was found.

McCauley pleaded with Saretzky for information at first.

“There’s a little girl who’s by herself. Dead or alive, it doesn’t matter, she needs to come home,” McCauley tells Saretzky.

“This is your opportunity to show you’re not a monster.”

McCauley and Saretzky are so close during the interview, their knees nearly touch as they sit face to face in a small room at the Blairmore RCMP detachment.

Saretzky remains evasive with the officer for about an hour, telling McCauley he doesn’t remember anything, that “God did it” and that the devil “taunts” him to do bad things.

Finally, the details begin to spill out of the tearful suspect.

Saretzky says the devil made him break into Blanchette’s home armed with a knife, crowbar and mask. He found Blanchette in his bed and began the attack, eventually slitting his victim’s throat.

Blanchette was killed because he was a “terrible father,” said Saretzky.

Upstairs, Saretzky says, he found Hailey in her crib and used a pillow to muffle the two-year-old girl’s screams. 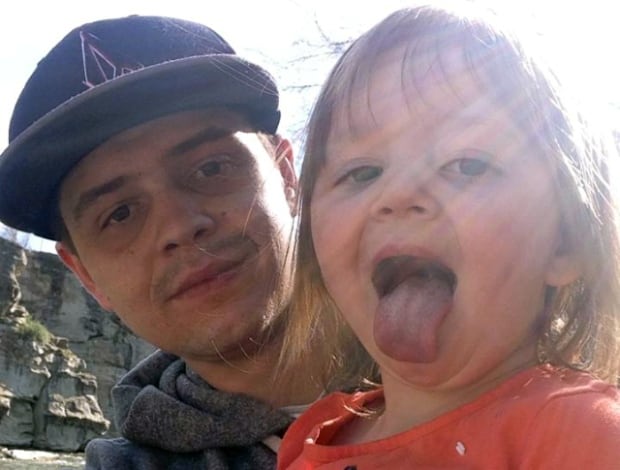 Police interviews with Derek Saretzky, who is accused of killing Terry Blanchette and his young daughter, above, are to be played in court on Thursday. When the Crown opened its case on the first day of the trial, jurors were told Saretzky confessed to police. (Amanda Blanchette)

Saretzky put Hailey in the back of the van he was driving and brought her to “the bush,” a campsite where he says he choked her with a shoelace before dismembering the girl, performing acts of cannibalization and finally burning her remains.

He says he burned other items, like a knife and books, that he had with him. Then Saretzky says he returned home where he smoked a joint.

A neighbour had spotted a white van near Blanchette’s home, and that vehicle became the subject of an Amber Alert when police realized Hailey was missing.

Saretzky’s family realized the van had features like one from the fleet used for their cleaning business and they contacted police. That’s how Derek Saretzky first got on RCMP’s radar.

Earlier in the day, jurors heard the recording that led to Saretzky’s arrest as desperate police officers and the accused’s own father took turns pleading for information in the minutes before he was arrested.

Three officers — Sgt. Stephen Browne, Const. Amanda Wilkinson and Const. Chad Koroluk — turn on a recording device and along with Saretzky’s father begin speaking to him.

“We’re trying to find her to bring her back to her mom,” Browne says to Saretzky.

Speaking with the officers and his father in the back of the dry-cleaning business, Saretzky breaks his silence about Hailey.

“You guys all just seen her right there … she’s in heaven,” Saretzky tells them. “Her spirit’s floating around.”

Some jurors leaned forward to look at Saretzky as the recording played in Alberta’s Court of Queen’s Bench. It was the first time they had heard his voice since he said the words “not guilty” on the first day of trial.

​”She probably didn’t have a very good life … ‘Cause she wasn’t happy,” said Saretzky.

Saretzky’s lawyer has told reporters there are “reliability issues” with the confessions.

Police suspected Saretzky was responsible for all three killings because Meketech and Blanchette were both attacked in their bedrooms by someone who used the element of surprise, and they both suffered blunt force injuries as well as stab wounds. He also listed all three victims on a note pad found in his apartment.

After his confession, jurors have been told, Saretzky took McCauley to the campsite where Hailey’s body was burned and performed a “re-enactment.” That video is expected to be played on Friday.

Follow the latest in the trial from our reporters in the courtroom here.